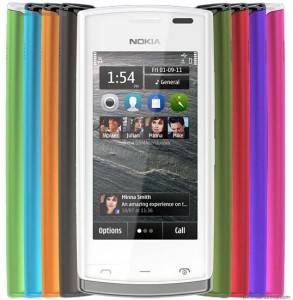 Nokia continues its new market strategy trying to put their models on a par with both Apple models as those belonging to the family as the famous Android Samsung Galaxy. Nokia for at least one year is changing everything we knew as smartphones Nokia, the Finnish company now finally listen to the market and displays what users want, its first major change to the model bequeathed N8 which brought some positive , but finally the big change and possible access door to success was the model N9 with which the company intends to address the iPhone sales sector, Galaxy S II among other powerful phones. Today we released another mobile phone the new line of Nokia but in this case a smartphone focused on a popular market, this being another major premises of the company for the future and is focusing on a more global market.
Manufactured in many of the factories in the world Nokia Nokia 500 looking to be a popular smartphone, the smartphone runs on Symbian Anna OS and has a 1GHz processor clock, this processor is coupled to a memory of 256 MB of RAM and 512 MB ROM. According to the Finnish company this world come to market under an environment of approximately $ 300 price. The Nokia 500 comes at Nokia Store and with that hardware is located in the perfect middle ground in the smartphone sector, but perhaps with greater resources and functions for this sector but can not locate it on par with the iPhone and company.
Your camera has five megapixels viewfinder meanwhile in which we can see both the content captured by this camera as everything related to this viewer smartphone is 3.2 inches with a capacitive touchscreen display. This screen has a resolution of 360 x 640 pixels. For its part, the camera can also capture video in low resolution VGA fifteen frames per second and has no secondary camera unfortunately. As we stand on the device’s new version Symbian Anna which offers a new visual interface Nokia operating system. In particular we have different icons following the pattern that the company also adopts MeeGo. We have three initial screen so that the user can use, all of which can be customized with shortcuts that we deem necessary.

In terms of connectivity specifications Nokia 500 does not disappoint, this works with 3.5G HSDPA and HSUPA networks as well as WiFi. To transfer data between devices and connection with other accessories have Bluetooth 2.1 technology. The device’s internal memory is 2 GB, and can by memory card slot microSD increase it to 32 GB which is the maximum that the mobile supports. Among other resources presents Nokia’s smartphone accelerometer, proximity sensor, digital compass, A-GPS support, Stereo FM Radio, MP3 and MP4 player. The Nokia 500 has the ability to swap the rear covers with various colors inside the box but have only two different covers. For its part, the Nokia 500 has more than 8 colors for the user’s choice, the Nokia 500 is a great option in the market to have a popular price smartphone but with very advanced resources.