Samsung’s Ativ Book 9 Lite was launched in the UK in August, and is the less powerful but more portable model in the Ativ Book series. Running Microsoft’s Windows 8 operating system (OS), the Ativ Book 9 Lite has a solid-state drive (SSD) for quick boot times and a touchscreen for those rare times when you actually want to use the Windows Metro user interface.

Measuring just over 17mm thick, we test to see if Samsung’s Ativ Book 9 can prove a worthy contender for those in the market for a Windows 8-powered Macbook Air equivalent

The Ativ Book 9 Lite’s appearance follows in Samsung’s usual hardware design footsteps, arriving in two main colours, a blue-black or white. Our review model was the blue-black edition, which we feel looks a little more stylish and would probably show fewer marks and stains after long-term use.

The Ativ Book 9 Lite’s entirely plastic construction means it does look and feel rather cheap, but it’s also very light for a Windows 8 device, weighing 1.58kg. It’s skinny, measuring just 17.4mm thick, making it a brilliant device for travelling with and using in both the home and the office, for example.

The Samsung Ativ Book 9 Lite’s chassis is very smooth in hand, which lends to its overall slimline and elegant design. Despite its super-slim form, build quality is a strong point for the Ativ, too. Both the keyboard and the screen feel robust and sturdy, despite their plastic construction. We tested this by taking the screen and forcing it in opposite directions: we found there was little flexibility. 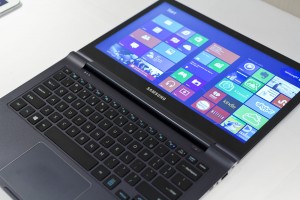 Another nice feature is that the Ativ Book 9 Lite’s hinge allows the screen to be pushed all the way back so that it lays flat to the keyboard, making screen-sharing much easier if, for example, you are playing a two-player touch-enabled game with a friend.

During our testing we replaced our everyday work and home laptop with the Ativ Book 9 Lite and used it to do pretty much everything for a week.

When testing laptops in this way we consider the keyboard one of the most valuable facets of a notebook device, so we were pleased to find that the Ativ’s full-sized keyboard feels great to type on and is a pleasure to use for constructing long documents and complex spreadsheets. Its excellent travel and placement allows you to type quickly with little effort and without making too many mistakes.

There’s a good set of shortcut keys that run across the top of the keyboard, allowing you to change brightness levels and turn the volume up, down or off. However, there are no media playback shortcut keys on the Ativ Book 9 Lite, which we found quite irritating, especially when using Spotify while multitasking, meaning that we had to leave a word-processing document to open the app and change the track, for example.

One thing that really let down the Samsung Ativ Book 9 Lite during our time with it, however, was the multi-gesture trackpad. It proved to be a real nuisance to navigate due to its width, which felt a little too large when moving the cursor from one side of the screen to the other, as well as being made from an overly smooth material that made it difficult to operate in general, especially when performing more precise actions.

The default function for the trackpad’s multi-gesture actions proved unusable for us. The cursor darted to an opposite corner of the display when we least expected it, so when we clicked on an icon, another window or application opened. The multi-gesture actions can be turned off, but even then the trackpad had a very “empty” feel when clicking the built-in mouse buttons, meaning that we naturally pressed harder to operate it, which not only required more effort but meant that the cursor moved slightly as we did so, making it less precise when selecting text, for example.

If you’re dead set on buying the Samsung Ativ Book 9 Lite and can’t get used to the trackpad – as we couldn’t – buy a Bluetooth mouse to avoid the frustrating design flaws.

Another aspect of the Samsung Ativ Book 9 Lite that we weren’t too impressed with was the screen. Although it is touch enabled, with all commands proving to be very responsive to touch, the laptop’s 1366×768 resolution display seemed to be low quality compared with those of other 13in notebooks we have tested lately.

On close inspection, pixels are very visible around text and images, seeming somewhat fuzzy around the edges.

Though it was not the best we’ve seen on a notebook of this calibre, the brightness of the Ativ Book 9 Lite’s screen proved vibrant enough for general day-to-day use, with the picture being viewable in a wide range of lighting conditions, even bright sunlight.

We used the Samsung Ativ Book 9 Lite in the garden with the sun directly overhead and we were still able to read what was on the screen, although as suspected, movies did look washed out, and the glossy screen meant that light was often reflected into our eyes when we were working outdoors.

The Ativ Book 9 Lite screen is by no means on the same page as Google’s Chromebook Pixel screen, which has a very clear and vibrant display. However, at half the price of the Pixel, we weren’t expecting an excellent display, and it is good enough for general use, such as working on Office documents and non-HD video playback.

In our tests, the Ativ scored a rather disappointing Windows 8 Performance Index score of 4.0. The score is determined by the lowest sub-score, in this case desktop graphics performance, and is not an average result of the performance of components. 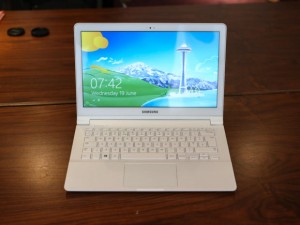 Though the overall index score was pulled down by the Ativ’s rather poor desktop graphics performance score of 4.0, other results were better, with processor calculations per second scoring a rather mediocre 4.5 out of 9.9 and RAM operations per second earning a score of 5.5. Strangely enough, gaming graphics scored the second-highest rating out of the lot at 5.9, thanks to the Ativ’s AMD Radeon HD 8250 graphics.

The Ativ Book 9 Lite’s primary hard disk rating was the best of the bunch at a rather impressive 7.9 out of 9.9, thanks to the system’s 128GB SSD drive.

These performance scores suggest that the Samsung Ativ Book 9 Lite isn’t capable of running graphically intense PC games, even with its quad-core processor, due to the integrated AMD Radeon graphics that in turn pulled down the system’s Windows Experience Index Score.

Putting the Ativ Book 9 Lite to the test with the new Sim City game, for example, we found that the projections were correct, as the device failed to render expansive city environments well and wasn’t smooth to play at the game’s default settings.

There was considerable lag until we turned down the graphics options in the in-game menu, turning off anti-aliasing so that the system could cope with running the game, but with less detail. Samsung doesn’t market the Ativ Book 9 Lite as a powerful gaming machine but more of a portable notebook, so we’re not surprised that it’s not capable of handling intense 3D gaming.

HD streaming on Netflix was also a problem for the Ativ Book 9 Lite, with video appearing jittery. We imagine that Samsung’s quad-core CPU is on par with Intel’s Core i3 notebook models, which have exhibited similar performance issues during testing on Netflix.

Turning the device on from cold, the Ativ Book 9 Lite took on average around seven seconds to get to the Windows login screen and almost 13 seconds to restart completely to the same point. This is on par with most Intel ultrabook devices also running from SSD drives.

Nevertheless, the Samsung Ativ Book 9 Lite generally handled the Windows 8 OS well. There was no major no lag when swiping between pages and programs popped up almost as soon as they were selected. However, give the Ativ something a little more demanding to do and it will struggle, with pages and applications frustratingly taking longer to load. Our review unit was brand new out of the box, but the Ativ Book 9 Lite will probably slow down considerably once a user installed lots of applications and stored large files, such as multimedia.

Samsung claims that the Ativ Book 9 Lite’s non-removable 30Wh battery is good for at least six hours of active use before running out of juice.

In our tests, we found that its battery drained from fully charged to completely dead in four-and-a-half hours. However, this was during continuous use on full brightness, including browsing webpages, writing with Google Docs, watching a movie and viewing YouTube videos.

As Samsung claimed that the Ativ Book 9 Lite would last significantly longer, we were disappointed with its battery life, though we can imagine that with intermittent use and the brightness level set down it would stay powered on for a good hour or so longer.

In terms of connectivity, the Ativ Book 9 Lite features just one USB 3.0 port and one USB 2.0 port, which is expected for a device of this size. Joining these is a Micro HDMI out – so you can output the Ativ Book 9 Lite’s display to an external monitor or smart TV, for example – a mini Ethernet port and a 3-in-1 SD, SDHC, SDXC multimedia card reader for expanded storage, on the left-hand side.

On the right-hand side of the chassis there’s a 3.5mm audio jack, a power jack and a mini VGA port, for those who need to port the Ativ’s display to a monitor that doesn’t support more modern display connectivity options.

On the inside, the Samsung Ativ Book 9 Lite has 802.11b/g/n WiFi and Bluetooth 4.0. It’s also worth noting that it has a HD 720p webcam and microphone set just above the screen for video calls. All these components worked well in tests.

For storage, the Ativ Book has a 128GB SSD. Although a bigger SSD would have been preferable to store more multimedia on the move, the SSD format means that the Ativ Book 9 Lite starts up in less than 10 seconds, which we were very pleased with when we needed the device to turn on as quickly as possible.

With a very slim and lightweight design, perfect for lugging around from one place to the next, the Samsung Ativ Book 9 Lite offers users a stylish and generally enjoyable potable notebook experience, with responsive touchscreen commands, a good keyboard and reliable performance.

However, those looking for a device that can do more than your average notebook perhaps won’t get what they need from the Ativ Book 9 Lite. Its inability to run more demanding applications means it can only really function as an addition to a desktop, as opposed to a replacement. That said, it should run heavier software, such as photo-editing applications, for example, just don’t expect it to run those as smoothly or quickly as a laptop with an Intel Core i5 or Core i7 processor.

At £600, the Samsung Ativ Book 9 Lite is a rather expensive bit of kit for general use such as web browsing and word processing: these are tasks you can do with a £300 entry-level notebook, for example. However, what you’re paying extra for with the Ativ Book 9 Lite is its slimline design, portability and, unfortunately, its touchscreen, which is let down significantly by mediocre display quality. It just depends whether you think portability is worth the extra money or not.